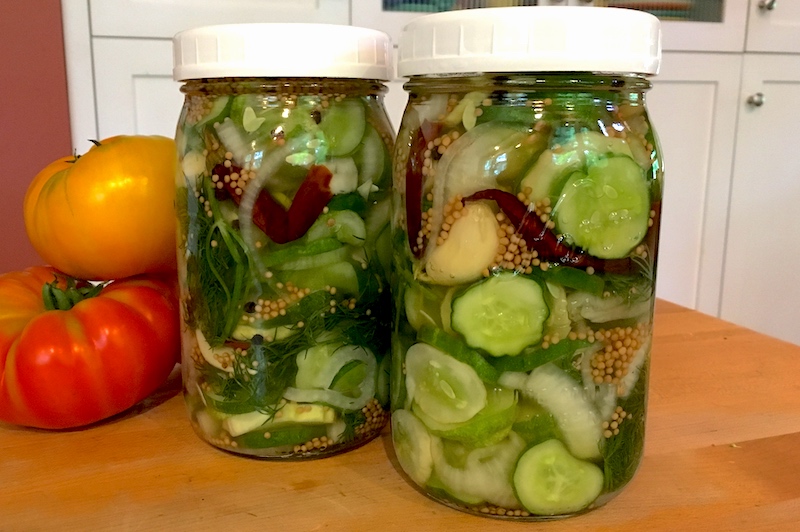 I'm not a woo-woo sort of person. Pragmatism runs deep in my veins, but recently it's been feeling like the universe is pointing me in the direction of fermentation. Not in a Portlandia "I can pickle that" way, though the show definitely picked up on a trend here with almost every chef in town featuring her own house-made pickles on every plate.

Granted, for several years I've been saying "This is the year I'm going to learn to make pickles!"—or kimchi or sauerkraut or whatever. And the year comes and goes without much progress being made, though I've participated in a few pickling sessions with friends. One of those sessions involved making pickled onions with my neighbors Bill and Jen, who have a huge garden on their city lot and preserve a great deal of what they grow every year.

When I dropped by their place to pick up some cucumbers the other day, Jen brought out one of two thick, three-ring binders full of favorite family recipes that her grandmother had carefully typed out—color me envious! It included one from her great-grandmother for fresh cucumber pickles that are ready in 24 hours. Need I mention that anything quick and easy has my name written all over it?

And indeed, when I got home, I sliced up those cucumbers, salted them down per great-grandma's instructions, made the brine, and a couple of hours later had two quart jars of pickles sitting in the fridge. I admit I sampled them before the 24 hours had gone by and they were delightful. So good, in fact, that they ended up coming with us that very evening as part of an antipasto platter we were taking to celebrate our friends' new home.

As for future fermentation festivities? Turns out the universe wasn't done with me just yet. Dave gave me a copy of Sandor Katz's The Art of Fermentation as an anniversary present, so expect to read about those adventures in future installments!

From my neighbor Jen.

Slice cucumbers into 1/8" coins. Slice onion into quarters lengthwise, then into 1/4" slices crosswise. Combine in large bowl. Add salt and mix. Place in refrigerator for 90 minutes.

While cucumber mixture is soaking, in a medium-sized pan heat vinegar and water to a bare simmer. Add sugar. Stir until it dissolves, then add any desired spices (mustard seeds, pappercorns, dried chiles and garlic cloves). Allow to cool slightly.

When cucumbers are ready, rinse in several changes of running water, draining thoroughly between rinses. (Great-grandma says to rinse until they no longer taste of salt, but mine never did get to that stage.) Drain thoroughly. Pack cucumbers and onions into quart jars, layering them with spices from the brine and the fresh dill. Pour brine over packed cucumbers, using a chopstick inserted down the side to press out air bubbles as much as possible. Cover with lid and put in refrigerator. The pickles will be ready in 24 hours. Makes approximately 2 quarts.