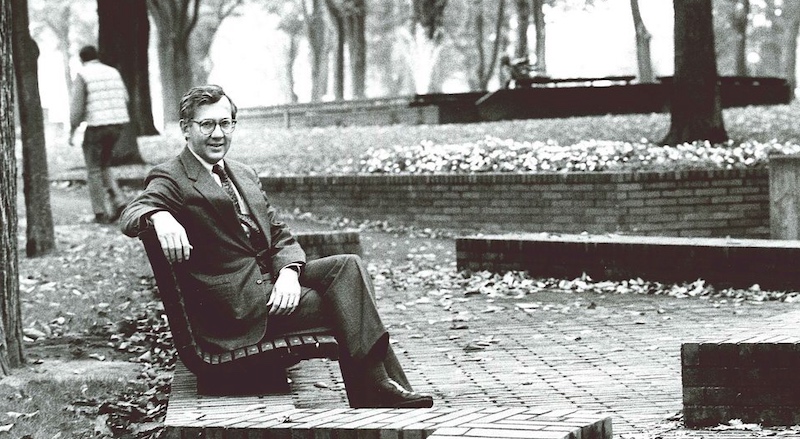 An appreciation of Henry Richmond by contributor Anthony Boutard of Ayers Creek Farm.

In fall of 1989, a soft-spoken person called me and introduced himself as Henry Richmond from Oregon. He had a meeting in New York City at the Ford Foundation and hoped I could meet him afterwards and join him for dinner. It was my first dinner date with someone from Oregon, and he seemed very nice, so I accepted. I took the train from New Haven to Grand Central Station, and met Henry in front of the foundation’s headquarters. We enjoyed a stroll and had dinner at Mamma Leone's. He asked me to come to Portland and work at his organization.

A year earlier, the brutal murder of Seraw Mulugeta shone a harsh light on the Pacific Northwest where the Aryan Nation had found a safe haven. Portland itself had a reputation as the grubby, down-at-the-heels sister of San Francisco and Seattle. The revered James Beard had fled Portland for Europe in much the same way that Ernest Hemingway had fled Oak Park. It was a rough city trying to salvage its dying core under the expansive vision of Neil Goldschmidt, formerly Secretary of Transportation in President Carter’s cabinet. Carol and I were mindful of all this as I headed off to my assignation in New York.

Maybe it was the rich meal or the violinist spooling out Neapolitan love songs, or maybe the magic in Henry’s gentle eyes. One way or another, I returned to New Haven that night enthralled by Henry’s vision. The fact is, years earlier, Carol and I had worked for an organization call The Trustees of Reservations. The goal of The Trustees was to create a "museum of the Massachusetts landscape." As a warden of Bartholomew’s Cobble, I worked with the farmers who kept the working elements of the landscape. The vision Henry articulated was more extensive; his was the preservation of a working, livable landscape encompassing a whole state through careful management of growth. That vision drew us westward.

A month later, Henry and I travelled down to a Board of Forestry meeting in Eugene. On that trip I became AB and that is what called me henceforth. On the way down, he pointed out the Coast Range on right and the Cascade foothills on the left. The narrow, 150-mile long Willamette Valley offered some fine agricultural land and most of the state’s population. He explained how the valley’s Urban Growth Boundaries kept growth from sprawling into its productive farm and forest land, and orderly growth also facilitated the management and livability of its cities. It was not a formula for stasis; growth would and could occur, but it was a careful approach to growth.

The Board of Forestry exhibited a level of civic comity few public boards could even dream of. At the time, the law required that the board convene with a consent agenda. If any member had an objection to an item on the agenda, it was tabled until the next meeting and staff would work to address the member’s concern. No votes were taken; as long as all members consented, the agenda item was adopted. The forestry board meeting had a cerebral quality more in common with a Religious Society of Friends meeting than the normal rough and tumble of public board.

On returning to Portland, Henry dropped me off at the Mallory with his endorsement: “It is a well-run hotel without being showy, and that is why ranching and farming families always stay here when they are in Portland.” Guests at the Mallory could count on an understated competence; a satisfying meal and a genuine smile. In the following years, we arranged for visiting friends and family members to stay at the Mallory.

From our first date in New York, I realized Henry was exquisitely attuned to the sensibilities of Oregon. He was like the Board of Forestry of the time, careful, deliberative and working to achieve good policies, and like the Mallory of the time, possessed of an understated competence that was used to build a better Oregon with his fellow citizens, and like that thin valley between the mountains, productive but vulnerable. For me, he was a mentor, teaching me how to advance legislation, build alliances and trust staff. For some reason, I was always AB to him.

In advance of the legislative sessions and critical meetings of the Land Conservation and Development Commission, the conference room at 534 SW Third was aswirl with disparate citizen activists—a carrot seed farmer from Madras, a pig farmer from Hermiston, a bicycle and pedestrian advocate from Washington County, a Benton County grass seed farmer, a Coast Range forestland owner, a cut flower grower from Forest Grove, chief lobbyist of the Metro Homebuilders, Chair of the Jefferson County Farm Bureau—all working with staff to forge a better planned Oregon.

This was Henry’s forte; he always stressed the need for “buy in” from a broad base of Oregonians. As professionals, staff could work on the nuts and bolts of the statutes and rules, but the underpinnings of policy were forged in that conference among people from different parts of the state and different sectors of the economy. Of the 19 Statewide Land Use Planning Goals, the first is "Goal 1: Citizen Involvement." Henry was also careful to keep the editorial boards updated and tracked the editorials diligently. The Oregonian had a box in front of their offices where, at 4:00, the 1-star edition was available. It was the first edition of the next day’s paper and, if an editorial on some critical issue was expected, a staff member was dispatched around 3:30 to grab it while the ink was still fragrant.

“The proof is in the pudding” was Henry’s oft-used caution. This November, as we meander down the valley to make our preserves, we will pass through farmland that remains protected from non-farm uses and rural sprawl, spotted with vital towns and cities carefully contained within their urban growth boundaries. The proof of Henry's diligence at building community support for the protection of Oregon’s character is there as the miles tick by, as are the names of the people on barn sides and mailboxes who helped him along the way.

As berry season approached, I thought of Henry and how nice it would be to see him when he stopped by for his flats of Chesters, which he shared with his friends and neighbors. At the end of June, his son Easton sent me an email simply saying “please call me.” Easton confirmed what I surmised upon seeing the terse note; I wouldn’t be seeing Henry again. But I will have plenty of occasions to remind me of the kind guy from Oregon who took me to dinner at Mamma Leone’s that crisp autumn day over 30 years ago.

To Henry, with all my love,

Photo of Henry Richmond from 1000 Friends of Oregon website.