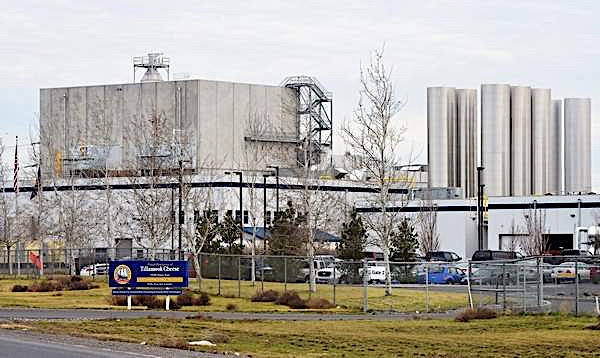 Outbreaks of COVID-19 have been common at food processing and meatpacking plants across the country, sickening and killing emplyees working shoulder-to-shoulder in enclosed buildings, often without the personal protective equipment (PPE) or proper air circulation needed to keep them safe and prevent the spread of the disease.

In the latest outbreak here in Oregon, the Oregon Health Authority reported on Tuesday (7/7) that 22 people were sickened at the Columbia River Processing plant that produces cheese and dairy products for the Tillamook County Creamery Association (TCCA). The report said that number may include household members and other close contacts to employees. An outbreak is defined by two or more cases linked to a common place.

The OHA's Joell Archibald said the agency was notified of the first positive test from an employee at the Tillamook plant on June 16th, almost three weeks ago, and began working with county and municipal public health staff in the area. She said that prior to the coronavirus pandemic, the names of employers would not normally have been released, but that under pressure from media and the public, state leaders decided on publicly releasing the names of companies where 5 or more cases were linked to a single employer; when the case count (including contacts) reaches 20, the company's name goes on a list in the OHA daily report.

OHA public information officer Timothy Heider said that an employer is notified by the employee when the employee receives a positive test result for the virus. Heider said that when the Oregon Department of Agriculture visited the plant on June 17, it was determined that there was adequate PPE and at that point "the company implemented containment control measures such as physical distancing and face coverings for employees." He also said that no deaths from the outbreak at the plant have been reported as of July 9th.

According to the procedures agreed on by state leaders, though, neither the employee's co-workers nor the community at large were informed until the 5-case threshold was met and the employer's name was released publicly. In short, this means that those workers and their contacts could be circulating in the community—shopping at the same stores and touching the same door handles, for instance—for days until the threshold is met.

Stand Up to Factory Farms, a coalition of local, state and national organizations concerned about the harmful impacts of mega-dairies—Tillamook is dependent on giant factory farm dairies for its milk supply—issued a statement today that said this outbreak  “underscores the vulnerability of the factory farm system and the workers in it. As cases continue to increase, it's unconscionable that Oregon is moving forward with permitting a new mega-dairy, Easterday Farms, that will exacerbate the extreme consolidation putting workers at risk. Oregon needs a mega-dairy moratorium and meaningful protections for food and farm workers now.”

For Tillamook's part, CEO Patrick Criteser issued a statement on the company's website assuring investors and the public that the pandemic has not disrupted their manufacturing operations or supply chain. In a statement the company said that three of the employees have already recovered and been cleared to return to work, while the rest are recovering at home, according to an article in the East Oregonian. "Those who are recovering at home or are quarantining after being identified as a close contact are receiving full pay and benefits," the company said.

The health authority's latest statewide weekly report showed that from June 29 to July 5, COVID 19 continued to surge with 1,910 new cases, an increase of 51 percent over the previous week.