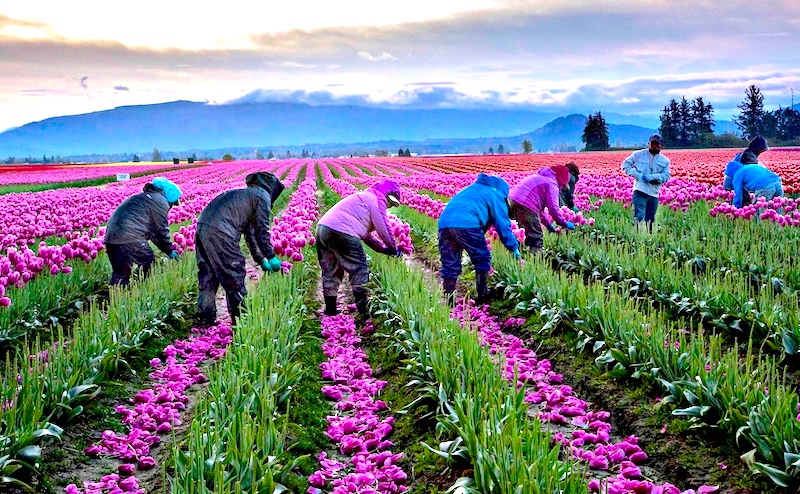 We've all read about the outbreaks of coronavirus in meatpacking plants across the country, but other workers in our food system have also been impacted by the spread of the virus due to lack of protective equipment, crowded working conditions and exposure to toxic chemicals that make them more susceptible to the virus. The Hillsdale Farmers' Market's assistant manager Azul Tellez Wright wrote about these issues in its newsletter.

The coronavirus pandemic has exacerbated many of the inequalities
that people of color face in the U.S.

The weight of Oregon’s $50 billion dollar agriculture industry is mostly carried by the thousands of seasonal and often undocumented workers who are hired each season. Agricultural working conditions can put farmworkers at a higher risk for infectious diseases like COVID-19. The nature of the work (i.e. harvesting, canning) makes keeping a six foot distance a challenge.

On top of that, many employers aren’t putting sanitation and distance requirements in place and aren’t providing their employees with personal protective equipment. Many migrant workers live in close quarters, making quarantining impossible. Federal guidelines for farmworker labor camps allow four people in a 10 feet-by-20 feet space, which is roughly the size of a garden shed. [A petition from the nonprofit Oregon Law Center is proposing stricter regulations to protect farmworkers, including changes to transportation, work and living areas to allow workers more space and ensure proper hygiene, according to the Oregonian.]

Despite paying taxes and being considered essential workers, immigrants cannot access the public benefits that many Americans have come to rely on the past few months. Immigrant and undocumented workers were also excluded from the stimulus checks that came as a reprieve for most Americans in March. In the event that they do get sick, many farmworkers are also not eligible for state or employer healthcare.

Clearly, the inequities that farmworkers face are made far worse by COVID-19. There are a number of local organizations that are listening to Oregon’s farmworkers and working with local and state agencies to provide protections against the COVID-19 outbreak. Causa is an immigrant rights organization that works to improve the lives of Latino immigrants and their families through advocacy, coalition building, leadership development, and civic engagement. Consider donating to Causa’s Worker Relief Fund which collects money to go directly to farmworkers families who were excluded from the federal stimulus package.

Woodburn-based PCUN (Pineros y Campesinos Unidos del Noroeste, or Northwest Farmworkers and Treeplanters United) is the largest Latino union in Oregon. They are raising money for their farmworkers emergency fund to support former and current undocumented workers affected by COVID, which includes farmworkers. The Oregon Latino Health Coalition is another organization that has been working with local and state public health agencies to increase protections for farmworkers. [Another organization working to improve conditions for farmworkers is Familias Unidas por la Justicia, a farmworker justice organization currently striking against dangerous working conditions and lack of protective equipment at fruit companies in Washington State.]