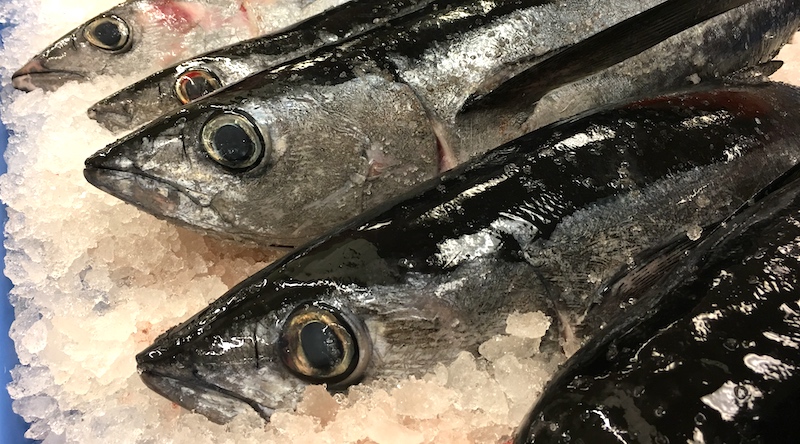 Buying Whole Fish (Plus a Hack for No-Hassle Freezing)

If you've been seeing ads from your grocery store or fishmonger offering whole fish for a fraction of the regular retail price but you're not sure how you'd use it, I've put together this handy guide.

There is nothing better, or better for you, than fresh, wild, local fish. Fish are packed with Omega-3 fatty acids, high in protein and low in saturated fat, and the American Heart Association advises eating fish twice a week. Trouble is, the usual price per pound for fresh fillets in the butcher case puts it out of reach for most budgets. Plus many commercially available ocean species can be high in mercury, and farm-raised fish are usually fed high doses of antibiotics—think of them as factory farms for finned creatures—due to the crowded pens they're raised in. And don't get me started on the effects of these farms on our waterways.

But those of us on the West Coast are fortunate to have access to some of the most delicious wild fish on the planet in our populations of native wild albacore and salmon. This year the fleet of primarily family-owned boats have been pulling in a supply of albacore from the fishery that stretches from Northern California up into British Columbia. Certified as sustainable by the Marine Stewardship Council, these albacore are young—just three to five years old, low in mercury and weighing in at 12 to 25 pounds—and individually caught with a hook-and-line system. (Want more info? Read my post, Albacore A to Z, for details.)

Wild salmon, particularly from Alaskan waters, are in plentiful supply right now, too, with stores advertising tempting steaks, fillets and roasts. But if you want to get a real deal, look for special sales events featuring whole fish.

"Whole fish?" you say. "I don't even know where to start with a whole fish!"

Well, let's talk about where you buy it. Make sure the fishmonger is a reputable source—recent studies have found that almost 20% of fish sold to consumers are mislabeled, and fish ordered at restaurants are more likely to be incorrectly labeled than fish bought at markets or grocery stores. I recently bought two whole albacore and two whole Coho salmon at New Seasons Market, a regional chain that buys its whole fish from local boats and has several one or two-day sales events per season.

When you buy whole fish, you'll need to specify how you want it packaged. The fish are already cleaned, and most stores will butcher your fish at no charge, whether you want steaks or roasts or whole fillets. I always ask for the trimmings to be included, since the head, fins and bones make terrific stock for all kinds of soups, chowders, risottos and it's my secret ingredient for making a fabulous paella. (Here's my technique for using those trimmings.)

And don't believe those charts meant for chefs that say the yield from a whole albacore, gutted and without the head, is 50 percent of the weight. From the 17-pound fish (head off) that I bought, my yield was more than 80 percent after removing the loins, roasting the carcass (350° for 30 min.), picking off the meat (nearly 2 lbs.) and then making stock from the bones (2 1/2 qts.). The total weight of bones, fins and detritus that went into the compost bin was only two or three pounds. (Kind of tells you about the food waste that happens in restaurants, though, doesn't it?)

If you're not going to throw the fish on the grill right away—never a bad idea, but just one good-sized fillet will feed four to six—you'll also need to think about how you want to store it. With a vacuum sealer it's a done deal, since properly packaged fish will keep for as long as a year. The idea is to keep air away from the meat to prevent freezer burn, so if you don't have a vacuum sealer, what do you do?

I quizzed the fellow at the fish counter when I bought my salmon, and he said that his dad, an avid fisherman, would put a single fillet in a zip-lock bag and submerge it in a sink full of water, holding the closure just above the water line. The water pressure pushes the air out, making an airtight seal around the fish. Not having a sealing machine myself, a little smoothing of the wrinkles in the bag while it was underwater did almost as good a job as the machine. (I found that a two-gallon zip-lock bag will hold a good-sized fillet quite nicely.)

A note: it's good to go over your fish to check for pinbones or other bones that the butchers may have missed. First, it makes it easier to just throw it on the grill without worrying about biting down on one while you're eating and, second, it keeps those pokey bones from puncturing the bag and letting air in. Just hold the fillet and feel for any bones by running your fingers down the flesh, then use a pair of (clean) needle nose pliers to pull out the bones.

All this is to say that you can have more fresh, local, sustainable fish in your diet without paying dearly for the privilege. As the old commercial used to say, "Try it, you'll like it!"