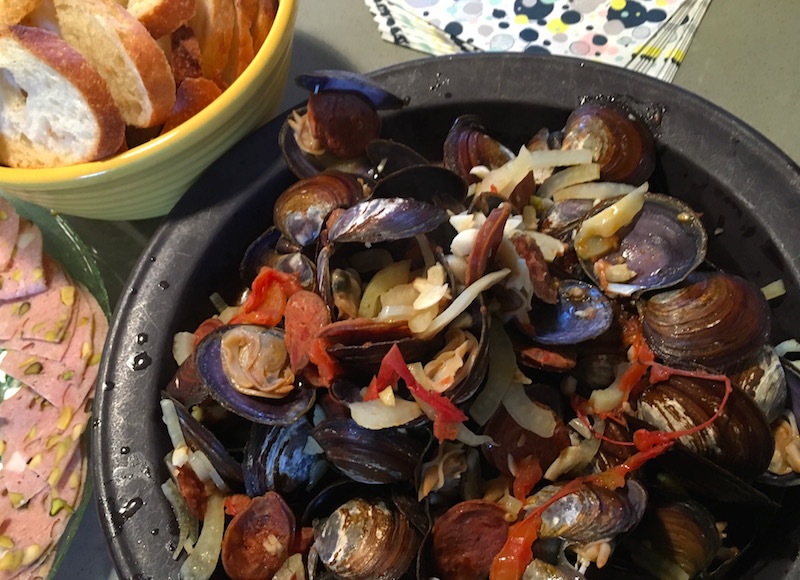 I know, I know…just the word "invasive species" makes you shudder, right? Visions of monstrous, deformed aberrations don't generally sound like something you want to find on your plate, much less put in your mouth or serve to guests.

But rest assured, gentle reader, that, in this case, the invasive species in question is simply just the wrong creature in the wrong place. Known as nuttalia obscurata, the Purple Varnish clam or just Varnish clam—sometimes marketed as the more delicious-sounding Savoury clam—was most likely sucked up as planktonic larvae into the ballast tanks of a large ship that was traveling from Asia to the Puget Sound. When the ship arrived and the ballast tanks were discharged, the surviving larvae found footing in the hospitable waters of British Columbia and the Sound.

In the waters of the Sound and the Hood Canal the Varnish clams have been displacing Manila clams, also natives of Asia that arrived here mixed in with Pacific oyster seed in the 1940s which soon began invading the territory of native Littleneck clams. The Varnish clams' success may be laid to their flexible nature, able to tolerate varied types of environments. Physiologically they may have an advantage because of their two feeding siphons and the ability to both filter feed and deposit feed (here's a fascinating deeper look at this clam). Both British Columbia and Oregon have established recreational fisheries for the clam, and a commercial market is developing.

And since April happens to be Invasive Species Month, it seemed appropriate to take them as an appetizer to a friend's birthday party. I drove over to Flying Fish, where I found them next to the regular Manila variety. In response to my question, the helpful clerk confirmed that the Savoury clam was an invasive species in Washington that was both delicious, as well as being a little less expensive per pound than the Manilas.

Four pounds of clams more than fed a crew of ten adults as an appetizer when combined with fennel, garlic, chorizo and a cup of white wine, then steamed for ten minutes or so, and garnered raves for their size and flavor. So help out our Littleneck and other native species and eat more invasive-yet-tasty clams; they'll thank you for it.

Steamed Clams with Fennel and Chorizo

Pour olive oil into a large pot over medium-high heat. When the oil shimmers, add fennel, garlic, chorizo and tomato slices and heat briefly. Add white wine and bring to a boil. Place clams on top and allow to steam for ten minutes until clams open. Serve with thin-slices of baguette for sopping up the delicious broth.