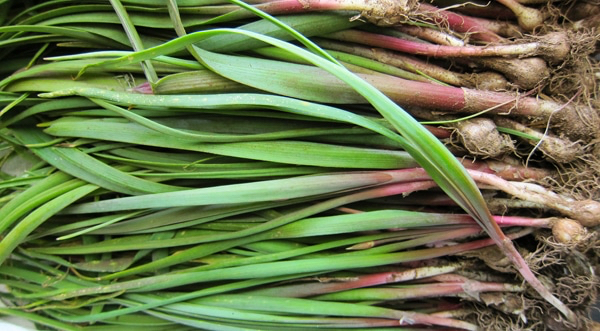 Now that spring is on the way, it's time to get out in our fields and forests and bring home some wild goodness. My friend, author Hank Shaw, is an authority on hunting, foraging and cooking all manner of wild things—his four books on those topics are considered definitive guides—and his post on harvesting wild onions is particularly pertinent to this season.

Ramps, wild onions, wild garlic. These are some of our best wild foods come springtime.

More than 100 species of wild alliums call North America home—allium being the genus covering both onions and garlic—but it is the Eastern ramp, Allium tricoccum, that has been all the rage among chefs in recent years. They’ve become so popular I even see chefs here in California using them with abandon; no native ramp grows within 2,000 miles of San Francisco or Los Angeles.

Locavore issues aside, perhaps the trendiest thing about ramps right now is to bemoan their overharvest.

Is this happening? Certainly, in some places. I’ve seen some startling before and after photos. But most professional foragers I know harvest the same patches of ramps every year — and some of these folks have been picking for 30 years. They know, as well as any good farmer, that you don’t eat your seed corn. The sustainability of any bulb, corm, root or rhizome harvest all hinges on how you pick the plant.

Here’s how you do it.

First and foremost, you must find your onions. Ramps are showy onions with large, wide leaves. They’re pretty easy to spot, especially in Eastern woodlands, where they can literally carpet the forest floor for acres. Most wild onions are not so easily located, although one, the invasive three-cornered leek of California and Oregon, A. triquetrum, is almost as gaudy as the ramp.

There’s an onion for pretty much every environment, from deserts to forests to streamsides to lawns to high above the treeline in Alpine meadows. My favorite is the dusky onion, A. campanulatum, which is common in the mountains from California to British Columbia.

Onions, being bulb plants, send up grasslike shoots first. This can be as early as January in the Bay Area for the three-cornered leek, to mid-July for Alpine onions. Onions, in general, like to live in large troops: It’s weird to find just one onion.

A great many onions have a rosy blush to the base of their stems. But not all. Your nose is your best tool when trying to figure out if that grassy shoot you are looking at is an onion. Anything that looks like an onion that also smells like an onion is an onion. Lots of bulbs, some of them poisonous, can look like an onion, but none will also smell like one, too.

Once you’ve found your onions, look at the patch. Are there only a few onions there? Or does the patch have hundreds or even thousands of plants? If there are only a few, consider moving on. I like to pick patches with at least 100 plants, and preferably patches even larger than that. Regardless, follow these rules when you do decide to pick:

Read the rest of Hank's post to get more suggestions on harvesting these wild bulbs, plus recipes for home use, including pickling!