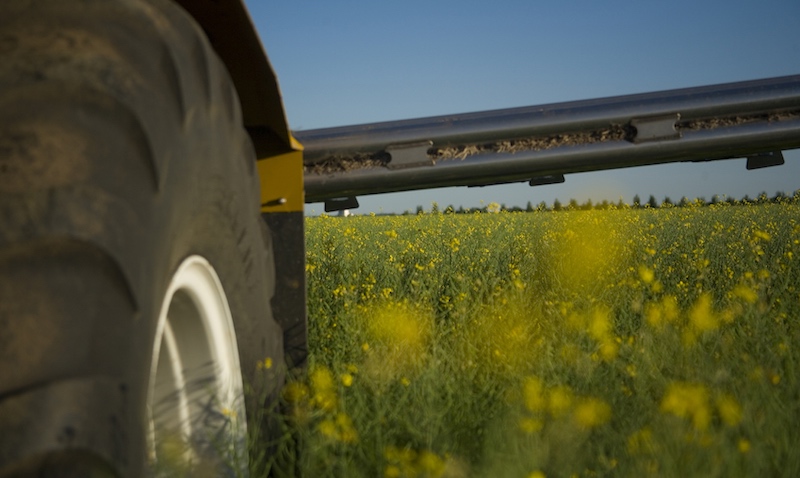 Your Food, Your Legislature: Take Action to Protect Oregon from Invasive Canola

Canola has a long and sordid history in Oregon going back to 1990, when it was designated as a controlled crop with strict regulations on where it could be grown in the Willamette Valley, because of its habit of cross-pollinating with other crops. And ever since, producers have come back again and again to try to expand the restrictions on its production.

On July 1, current rules that cap annual canola production at 500 acres in the Willamette Valley expire, and—suprise, surprise—once again canola producers are attempting to roll back that restriction. The Oregon Legislature is considering SB 885, a bill that would maintain the current 500 acre per year cap indefinitely.

What can you do about it? You can e-mail your legislators and tell them to maintain the current restrictions as outlined in SB 885 (sample letter at bottom). You can also submit e-mail comments on the ODA canola rule by Friday, June 21 at 5 pm (sample text at bottom; written comments can be sent to Sunny Summers, Oregon Department of Agriculture, 635 Capitol St. NE, Salem, OR 97301).

"The Willamette River, from its headwaters in the Calapooya Mountains outside of Eugene to its confluence with the Columbia north of Portland, forms the base of a long narrow valley that not only contains 70% of the state's population, it's also Oregon's most fertile agricultural area. Averaging only 25 miles wide, the valley's rich volcanic and glacial soil was deposited here by ancient Ice Age flooding and can be half a mile deep in some areas.

"Orchards, vineyards and farmland vie with urban areas for space in its narrow confines, and some crops have been tightly controlled to prevent problems with cross-pollination from the distribution of pollen by the wind, water and dust churned up by traffic along its length. Canola, also known as rapeseed, has been one of those controlled crops and has been regulated in Oregon since 1990.

"Because it is a member of the Brassica family (Brassica napus, B. rapa and B. juncea), it can cross-pollinate with with similar brassicas like cabbage, broccoli, cauliflower, kale and turnips, endangering these valley crops and the farmers who depend on them for their livelihoods. With the bulk of the domestic canola crop also contaminated with GMOs (approx. 93%), this presents a particular threat to organic farmers and seed producers, since current USDA Organic guidelines do not allow for genetically engineered material."

The Oregon Dept. of Agriculture (ODA) issued a temporary ruling in 2012 to allow planting of the crop in certain formerly protected areas, prompting Friends of Family Farmers (FoFF), the Center for Food Safety (CFS) and three Willamette Valley specialty seed producers to file suit to stop the ruling from taking effect. As a result, the Oregon Court of Appeals overturned the ODA's action, whereupon the ODA filed for a permanent ruling to allow growing of canola, prompting the legislature to pass a ban on the production of canola in most of the valley through 2018. Unfortunately, in 2015 a handful of canola growers unhappy with the previous bill pushed through HB 3382, which authorized 500 acres of commercial canola production per year from 2016 through July of 2019.

What all this means that if you care about being able to buy locally grown, organic, non-GMO produce at the farmers' market or greengrocer's, it would behoove you to write your legislators and submit a comment to the ODA. I've made it simple to do by supplying suggested text (below) that you can copy and paste into your e-mails or letters. (Thanks to FoFF for supplying bullet points).

I am writing to urge you to support SB 885. We must maintain current restrictions on Willamette Valley canola production that expire July 1 in order to protect the region’s important specialty seed industry and the hundreds of farmers, gardeners, and food producers who depend on it.

[your name and address]

I am writing because the Oregon Department of Agriculture’s draft proposal to address the risks from canola production falls far short of what is necessary to protect the unique attributes of Oregon’s world-renowned specialty seed industry.

I oppose the draft rule because it includes no acreage cap, doesn’t prohibit canola inside the proposed Isolation Area, doesn’t prohibit herbicide tolerant or genetically engineered canola varieties, and leaves many Willamette Valley farmers unprotected from the risks associated with canola.

[your name and address] 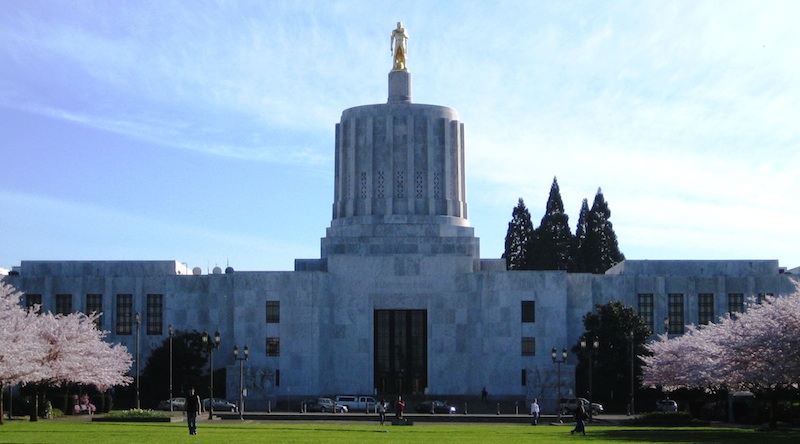 On the first day of the 2019 Oregon legislative session in January, more than 1,500 bills were introduced, and there are likely to be at least twice that many by the time the session ends. Here is the latest report on issues affecting the food we put on our tables. Thanks to Friends of Family Farmers for their assistance with this report.

Clean Energy Jobs or Cap-and-Trade (HB 2020): As anyone who's paid attention to the news the last few days knows, there is historic flooding happening in the Willamette Valley, made worse by the effects of climate change. This bill attempts to deal with greenhouse gas emissions from the state's largest emitters of these gases by capping these emissions from most large industrial sources—those that emit more than 25,000 metric tons of carbon dioxide (or equivalent) per year—effectively putting a price on carbon.

Shockingly, the bill exempts the state's largest agricultural producers of greenhouse gases, and your voice is needed to amend the bill to include these factory farms under the cap.

Sign here to send an e-mail to your legislator that Oregon needs to stabilize the climate by reducing industrial and other large sources of greenhouse gas emissions, as well as invest in climate-friendly agricultural practices.

Moratorium on Mega-Dairies (SB 103 and SB 876): Despite efforts on the part of a coalition of 22 health, environmental and animal rights organizations, both of these bills to tighten regulations on factory farm dairies, in part based on the egregious violations and environmental damage from the recent closure of Lost Valley Farm, were voted down in committee.

“Even the most reasonable reforms were blocked by lobbyists working with these big corporate agribusinesses,” said Ivan Maluski, policy director for Friends of Family Farmers, in an article in the Salem Statesman-Journal.

The article goes on to say that Tillamook County Creamery Association (TCCA), maker of Tillamook Cheese, and Threemile Canyon Farms, the Boardman-area factory farm dairy that supplies the bulk of the milk used to make Tillamook's cheese, testified against the bills, saying the entire industry should not be punished for the faults of one bad actor. It also mentions Easterday Farms, based in Pasco, Wash., which purchased Lost Valley Farm, has indicated it will reopen it as a dairy. The facility was previously permitted for as many at 30,000 cows.

Bans Sale or Use of Neonicotinoid Pesticides (HB 2619): Originally a statewide ban on the sale or use of products containing neonicotinoid pesticides, a class of powerful neurotoxic pesticides that is lethal to pollinators, this bill was amended to ban chlorpyrifos, a pesticide that has been shown to damage children's brains. It no longer mentions neonicotinoids.

Family Farmer Loan Program (HB 3085): Provides low-interest loans to small and mid-sized farmers for land and equipment, including beginning farmers, is now in the Ways and Means Committee where funding will be decided between now and the end of the session.

Beginning Farmer Incentive Program (HB 3090): Helps beginning farmers with student loan debt and tuition assistance. It passed out of committee and is now in the Ways and Means Committee where funding will be decided between now and the end of the session.

Ability to Sue for GMO Contamination (HB 2882): Protects farmers by holding the patent-holders of genetically engineered crops financially accountable when their products cause economic harm to farmers who experience unwanted contamination. Passed out of committee and moves to the House Rules Committee for further discussion.

Find your legislators and let them know you expect action on the issues that concern you.

Your Food, Your Legislature: Report from the Halfway Mark

On the first day of the 2019 Oregon legislative session in January, more than 1,500 bills were introduced, and there are likely to be at least twice that many by the time the session ends. Here is the latest report on issues affecting the food we put on our tables. Thanks to the Center for Food Safety and Friends of Family Farmers for their assistance with this report.

Moratorium on Mega-Dairies: Introduced by the Senate Environment and Natural Resources Committee to address the impacts of factory farm dairies in Oregon. Take action here. Read more about mega-dairies in Oregon.

Management of Future Mega-Dairies: Two bills emerged from a work group organized by the Senate Environment and Natural Resources Committee.

"Clean Energy Jobs" or Cap-and-Trade (HB 2020): Establishes a cap on greenhouse gas emissions from the state’s largest emitters—except for agriculture and forestry, two large sources of emissions and industries heavily represented by lobbyists in the Capitol—while creating an ‘allowance’ program intended to generate funding for climate adaptation and other programs. Public interest and small farm organizations are working to include agriculture and forestry in this bill.

Ban Aerial Spraying of Pesticides (HB 2493): Prohibits aerial spraying of pesticides of land within the McKenzie River and Santiam River watersheds, which make up much a significant portion of the Willamette Valley.

Ability to Sue for GMO Contamination (HB 2882): Allows farmers who have been harmed by contamination from genetically engineered crops to sue the patent holders of those crops.

Bans Sale or Use of Neonicotinoid Pesticides (HB 2619): Statewide ban on the sale or use of products containing neonicotinoid pesticides, a class of powerful neurotoxic pesticides that is lethal to pollinators.

Beginning Farmer & Family Farmer Land Access: Three bills that would support new and existing small farmers have been sent to the House Committee on Agriculture and Natural Resources with a hearing set for 3 pm on Thursday, March 14. E-mail a letter of support for all three before that date (link for address and suggested verbiage).

Oregon Agricultural Heritage Program (HB 2729): Provides $10 million in grants for farm succession planning and funding for both long term conservation planning and protection for working farmland at risk of development or conversion to non-farm uses.

Limits on GMO Canola in the Willamette Valley (HB 3026; SB 885; HB 3219): A 500-acre restriction on growing this crop is expiring in July, 2019. These bills seek to extend that limitation going forward because canola easily cross-pollinates with food crops in the brassica family, endangering organic growers and specialty seed growers. Contact your legislators here. More info on canola in Oregon.

Find your legislators here and let them know you expect action on the issues that concern you.