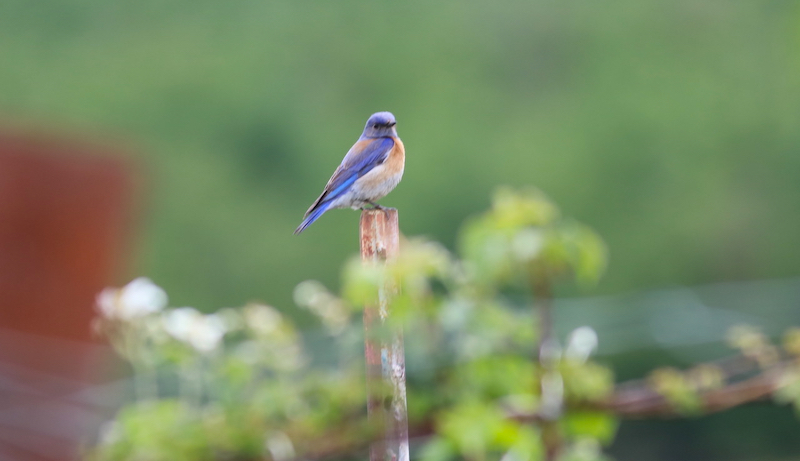 I once introduced an essay by contributor Anthony Boutard as a "bulletin from the real world," a ground-level—and occasionally whimsical—perspective on the life he and Carol have nurtured at their organic farm in the Wapato Valley west of the city. His writing describes the polar opposite of the sometimes frantic, crowded and, especially now, anxious lives of city-dwellers. While the investigative report below could have recorded a grisly crime, it is offered here as balm:

We have a pair of bluebirds that have settled in one our new boxes. Everyday, the tree swallows haze them, hoping to take over the box. They succeeded last year, building a nest on top of the dead bluebird chicks. The grim side of nature. I decided I would rethink my approach to building and siting boxes in the hopes of providing the bluebirds a better home.

Bluebirds generally nest in the hills, where the population of swallows is lower. Not so many mosquitos and other small flying insects. The bluebirds feed on larvae and sedentary insects for the most part. At our elevation, the mosquito-eating swallows thrive presenting stiff competition for nest sites. A string of wetlands also favor the swallows in terms of dietary needs.

This year, I placed some boxes where they can be defended, tucked into trees which break the swallows’ dives. On some, I added a perch board and provided a longer lip on the lids. Bluebird experts caution against such perches, arguing that predators can use them. From my observation, nest predation by tree swallows is more of a problem than any other threat, so I threw caution away and added perch boards.

At 3:20 today, I went to observe the box from a discrete distance. The female left the box around 3:29. They spent a moment on the power line and then dropped down to forage in the grass. At 3:36 a swallow flew over the box. The bluebirds returned to the box in a wink of an eye, I didn’t even see them return, and the male placed his body across the entry to protect their nest.

The swallow made a few passes and flew away, and the male moved away from the entry, but remained on the perch.

A few days ago, the strafing by four swallows lasted nearly 15 minutes, with the male tucked up tight against the entry the whole time. It was amazing to observe. The bluebirds have their routine down.

This time I had my camera and captured the bluebirds’ reaction. Per Detective Joe Friday, just the facts:

2. At 3:30, they meet up at the cable before dropping into the grass to feed.

3. At 3:36, a threat is seen and they return to the box with the male defending its entry.

4. Threat abated, at 3:40 the male shifts away from the entry, but remains vigilant.