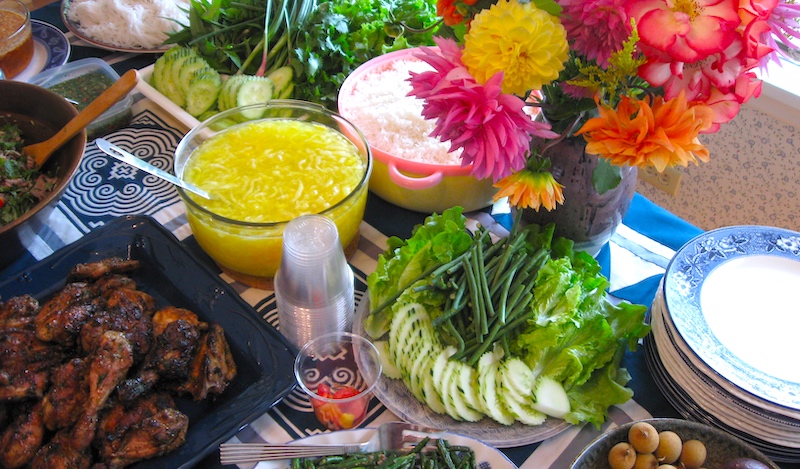 Book Review: Cooking from the Heart, the Hmong Kitchen in America

Sami Scripter's groundbreaking book, Cooking from the Heart: The Hmong Kitchen in America, written with co-author Sheng Yang, has just been released in paperback. When it was published by the University of Minnesota Press in 2009, it was the first published collection of Hmong recipes since the Hmong people adopted a written language in the 1950s, and it represented a cultural milestone for the widely dispersed Southeast Asian community. I wrote a story about Scripter and Yang for the Oregonian's FoodDay, and I'm republishing it here.

The Hmong people had no written language until the 1950s, so it makes sense that it took until now for them to get their first cookbook. 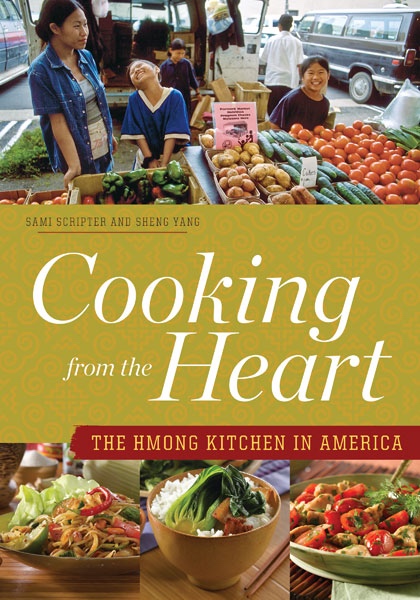 But to tell the story of the book, we need to go back to 1980. That's when Sami Scripter, the coordinator of the talented and gifted program at Rigler Elementary School in Portland, met Sheng Yang, a young Hmong (pron. "mong") immigrant, in her English as a Second Language class. Scripter's desk was in one corner of the room, and she was taken with the inquisitive and self-possessed 11-year-old.

"Sami was always very helpful," Yang says. "I'm a very nosy person. I'd go up to Sami and she would always answer my questions."

Portland had seen a large influx of Hmong from refugee camps in Thailand as part of a resettlement program in the late '70s. To welcome the newcomers to Rigler and expose the community to Hmong culture, Scripter organized a talent night that showcased Hmong songs, dance and food.

Yang was scheduled to perform in the show and, since they lived just two blocks apart, Scripter would often give her a ride home from practices. Yang's mother would invite Scripter to stay for dinner, and eventually the two families formed a strong friendship. Knowing how fond Scripter and her family were of Yang, her parents asked if it would be possible for her to come live with the Scripters.

"Among Hmong families, children will often go to live with an aunt and an uncle for a year," Scripter says. "It's considered a learning experience. So it wasn't out of character for their culture, and we could help Sheng with her English and her classes."

"When I moved in with Sami and her husband, Don, he actually built bunk beds for me and (Scripter's daughter) Emily," Yang says. "Ever since then, Sami and Don and their family have been a part of our family."

As with many cultural exchanges, it quickly became a two-way street. While Yang's English improved and she learned to appreciate tomatoes, she also began teaching Scripter and her new American family about Hmong cooking.

"She needed a certain tool but didn't know the American word for it," Scripter said. "Of course, I didn't have it in my kitchen, so we ended up going back to her house. It turned out it was a mortar and pestle."

Portland's Hmong population is estimated to be around 4,000, relatively small compared with the larger communities found in Minneapolis and Sacramento.* Most came here as refugees after the Vietnam War, when they were targeted by the communist government in Laos for helping the U.S. during the war.

In the mountains of Laos, they'd believed in a form of animism and used shamans and herbal remedies. Wild ingredients such as lemon grass, bamboo and rattan shoots, and banana blossoms, as well as herbs and seasonings such as cilantro, green onion, galangal, ginger, hot chiles, fish sauce and black pepper were commonly used.

Most food was cooked over an open fire, sometimes heated in a pot of broth or wrapped in banana leaves and steamed. Compared with the fiery cuisines of many of its Southeast Asian neighbors, the cooking of Laotian Hmong was fairly mild and focused on subtler herbs and broths.

As in many traditional cultures, food often played a central role in most ceremonial gatherings, whether for the new year, weddings and funerals or for shamanistic healing rituals. To this day, many Hmong foods have some spiritual or cultural significance.

But because the Hmong had no written language, until very recently they were dependent on an oral tradition to pass on their cultural heritage, and many of the recipes for these significant cultural foods had not been recorded.

Which is where Scripter and Yang's unique relationship enters the story.

Having written down Yang's recipes over the years, Scripter and Yang, now an adult, began talking about creating a book that would not only introduce Hmong foods to Western audiences but would also be a written record of the traditions that were becoming increasingly diluted by the influence of American culture.

"We wanted it to be representative of Hmong people across the United States," says Scripter, "not just what came out of Sheng's kitchen." She started traveling to different Hmong communities around the country, asking who made the best traditional foods, such as larb or cracked crab.

"So I'd go over to her house and cook cracked crab," Scripter says. "Then I'd ask what else people like that she cooks, and one thing led to another."

One interview was particularly significant and underscored why Scripter felt it was so important to write the book, which she and Yang had decided to call "Cooking From the Heart: The Hmong Kitchen in America."

"I met a woman and she really wanted to tell me this story," Scripter said of her first meeting with Mai Xee (pron. "my see") Vang.

After Vang married and left home, her mother fell ill and eventually succumbed to kidney disease. "Unbeknownst to her children, when Ka Kue knew she was really ill she started writing a journal," Scripter says. "It's all about her life in Laos and is illustrated with her own drawings, with all the traditional farming and cooking implements.

"Because she knew she would die, she wanted her children to have her voice to tell them what to do to be a good Hmong man or woman," Scripter says.

After the funeral, Vang and her siblings found their mother's journal, wrapped tightly in a Hmong skirt and concealed in a basket under her bed. Under the little drawings in her journal, Kue had written, "Peb ua neej nyob yuav tsum muaj tej nuav mas txhaj paub ua peb lub neej nyob. Nuav yog qov ob huv peb lub neej." Roughly translated, her words mean, "In our lives, we must have these things in order to make a good life."

* Current estimates for the Hmong population in Oregon are just under 3,000.

Photo of chicken larb by Robin Lietz from Cooking By Heart.