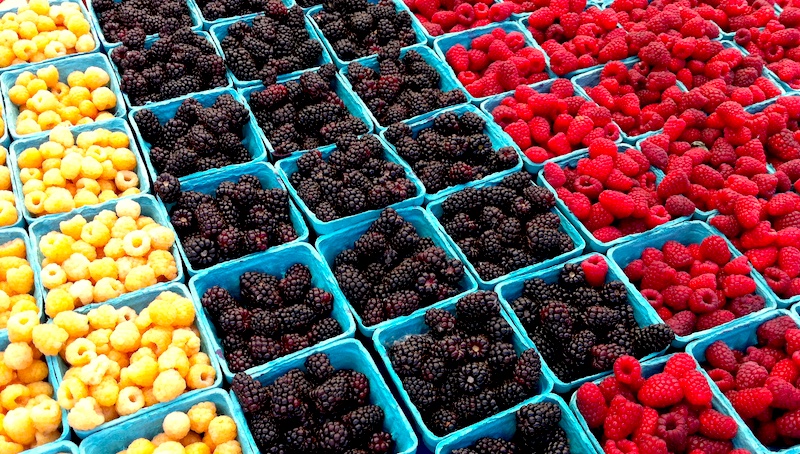 It wasn't an auspicious beginning to a meeting. As I sat down to talk with Josh Alsberg, aka "Fruit Monkey" and proprietor of Rubinette Produce in the wondrous land of food that is Providore Fine Foods, he said he had sad news.

"Strawberries are done," he deadpanned.

My shocked expression caused him to quickly add, "I mean Hoods. The heat cut them off." Then Alsberg assured me that we will be seeing other varieties like Seascapes and Albions through the summer and into September, though the harvest this year is looking slimmer than usual—the word he used was "trickle"—so he's advising you strawberry addicts out there to get to the farmers' markets on the early side to get your fix.

In happier news, he said the bounty of other berries is about to bury us, and he's started to see raspberries, blackberries, tayberries and loganberries on farmers' fresh sheets. He expects marionberries and local blueberries to appear en masse by the 4th of July, and the "bloobs," as we refer to them here at home, should stick around well into August.

A caveat: Alsberg emphasizes that the summer's heat will affect all the berries—it can make strawberries more woody. He said the best time to buy berries at the markets is on the early side while they're still cool, then process them soon after you get home so they're not sitting around in the heat. As for freezing, his advice is to spread the berries out on sheet trays—the industry refers to it as "IQF" or "Individually Quick Freeze"—before freezing and bagging. (I hasten to add that Monsieur Boutard of Ayers Creek Farm would disagree…)

Alsberg also crows that "cherries are on!" and we should be seeing local—he includes Washington's Yakima-area fruit in that definition—red-fleshed varieties like Attikas, Royal Brooks and Chelans at farmers' market stalls. Pro tip: Alsberg shares that local cherries tend to be more expensive at the beginning of the season when the harvest is just getting going, so if you can hold off until after July 4th, you should see prices begin to drop somewhat. (Wink wink, nudge nudge.)

It's not all fruit out there, either, and despite his Fruit Monkey moniker, Alsberg is equally excited about the coming avalanche of vegetables about to bury us in local green (and yellow and red and…). We're in the throes of squash season, he says, with zucchini, crookneck, eight-ball (a type of ball-shaped zucchini), pattypan and costata romanesco (a ribbed green summer variety) flooding in. You'll also find alliums in abundance, with scapes of all sorts—leek, shallot, garlic, etc.—sticking around for a bit, soon to be overshadowed by fresh, as opposed to cured, Walla Wallas, red onions, scallions and fresh shallots.

There is the slightest whisper about local tomatoes starting to appear, but Alsberg said that it'll be mid-July before they'll be available in any quantity. Peas, asparagus and favas, those fleeting bright green delights of spring, are on their way out, as are the spring roots like radishes and turnips, but cucumbers are coming and local lettuces are in their glory right now. Romano beans and their compatriots are just starting to appear, as are all the herbs, including my favorites, basil and tarragon, along with local celery and carrots, as well as newer faces like sprouting cauliflower and purple sprouting broccoli (referred to as PSB in certain circles).

Alsberg didn't realize he'd made "ze leetle joke" when he said that "new potatoes are starting to turn up" (ha!), but shoppers should find yellow, red and fingerlings aplenty. With warming temperatures, rhubarb will be getting scarce, but don't despair, local eggplant is coming, as are melons (by the end of July) and apricots.

Other bits and bobs to look for include orach, a red-leaved plant in the same family as spinach and chard, and arugula. Local corn will be coming around the end of July, as will the plethora of peppers from sweet to hot. You'll start seeing plums in mid-July with the full panoply appearing in August along with table grapes.

My advice? Boot up your spreadsheets and make a plan to use some of this local goodness now with schemes to preserve some for winter!